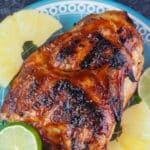 Grilled Huli Huli Chicken is sweet, sticky, and slightly smoky delight! Originally from Honolulu, Hawaii this chicken is marinated in a sweet and savory marinade that is reduced later into a delicous BBQ sauce for basting.

Ingredients you will need

Here is a quick snapshot of the ingredients you'll need for this recipe. Scroll to the recipe card where you will find the exact measurements.

How to make this

Step 1: Make the marinade and marinate the chicken

Place your chicken halves or chicken pieces in a large shallow container or plastic bag. Pour the marinade over the chicken. Marinate at least 4 hours or up to 24 hours. Be sure to turn the chicken while it is marinating.

Step 2: Grilling the chicken and making the sauce

Place the chicken on the grill, and reserve the marinade. Turn the chicken frequently during the cooking process. Cook the chicken until it reaches an internal temperature of 165-degrees.

Bring the marinade to a boil, and leave for a few minutes. Reduce the heat so the liquid simmers until it reaches the consistency of a thin BBQ sauce. This usually takes about 45-minutes to an hour.

Towards the end of the cooking process brush the BBQ sauce on the chicken and cook an additional 10-minutes. Remove the Grilled Huli Huli Chicken from the grill and allow to rest for a few minutes prior to serving.

Remember to turn the chicken often to prevent burning as the marinade contains a lot of sugar. Do not use fresh pineapple juice sold in the refrigerated section or make your own. Fresh pineapple contains bromelain which is a strong natural tenderizer that will make your chicken to soft. This chemical is killed in processing pineapple as it is prepared to be shelf stable.

What does Huli Huli mean in Hawaiian?

It means turn, or flip.

What island is Huli Huli chicken on?

Ernest Frank Morgado an American-Portuguese businessman is credited with creating Huli Huli chicken on the island of Honolulu, Hawaii in 1955.

Serve this Grilled Huli Huli Chicken with a cool tomato cucumber salad, griddle potatoes, or some potato salad with some sweet rolls. This is also wonderful with some rice or steamed fresh vegetables or pineapple.

Store up to one week in an airtight container. Reheat in microwave. Can be frozen up to three months, and thawed in refrigerator prior to eating.