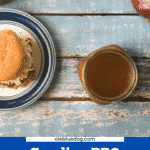 This North Carolina BBQ Sauce is a sour, tangy, and spicy thin vinegar-based sauce. This is an easy "dump-and-go" sauce recipe that anyone can make. A traditional sauce that will also show your friends you really know your way around BBQ!

Is this a regional barbecue sauce?

Yes, this sauce originates from North Carolina where whole hog BBQ over an oak fire is common. It is considered the mother of BBQ sauces. A vinegar- and pepper- based sauce at it's core but it has many variations. The sauce is cooked with the meat low and slow to keep it moist.

A matter of some debate between cooks is the addition of either tomato or mustard. This recipes incorporates both tomato and mustard based on my time in North Carolina at Camp LeJeune. After moving to Florida, I couldn't find my favorite sauce so I added together ingredients until I found one just like I used to have while I was in the service.

Bring the sauce to a simmer over medium heat until all ingredients are combined. Set aside, and allow to cool completely. Refrigerate for up to two months.

Depending on how much you smoke and BBQ you may want to make more. We typically will make a ½- to 1-gallon at a time as we use it frequently. The directions are the same you just need a bigger pot to cook it in.

What can I use this on? 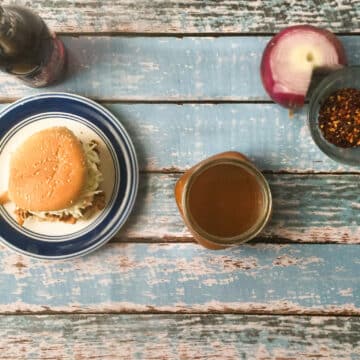 This North Carolina BBQ Sauce is a sour, tangy, and spicy thin vinegar-based sauce. This is an easy "dump-and-go" sauce recipe that anyone can make. A traditional sauce that will also show your friends you really know your way around BBQ!
5 from 1 vote
Print Pin Rate
Course: Side Dish
Cuisine: American
Prep Time: 5 minutes
Cook Time: 10 minutes
Servings: 1 recipe
Calories: 415kcal
Author: Matt