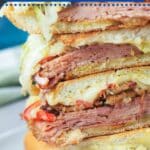 This Blackstone Cuban Sandwich is a simple sandwich made with mojo pork or roast pork, deli ham, Swiss cheese, pickles, and mustard. A hearty sandwich made as we eat them in Tampa Bay that will a huge hit for your family or your next tailgate or party.

Ingredients you will need

Here is a quick snapshot of the ingredients you'll need for this recipe. Scroll to the recipe card where you will find the exact measurements.

How to make this

To be best prepared to make these Blackstone Cuban Sandwiches assembly line style be sure that you gather your ingredients together to make this a smooth process. Be sure you have your bread cut and spread with your condiments, pickles sliced and ready, and meats where they are easily accessed along with any other ingredients you are using.

Since I was cooking half a loaf of bread or a 12-inch sandwich I found it helpful to bring everything I needed to make each Blackstone Cuban Sandwich with me on a small baking tray which made life so much easier.

Preheat the Blackstone Griddle to medium-low heat or about 300 degrees. Add the mojo pulled pork and deli ham to the griddle to heat. The deli ham will be done quickly and first. Be sure to flip it on both sides.

The bottom half of your bread should be waiting with your mustard or mustard-mayo spread, and pickles so when the ham is done it can be layered onto the sandwich next followed by the pork once it is heated through. Top with Swiss cheese and the top half of the bread.

Unless....you are making it "American" style which means you are adding either or both shredded lettuce and sliced tomatoes.

If you're Cuban bread didn't come buttered melt some butter and brush on prior to cooking on the griddle.

No sandwich press, no problem! Use a cast iron pan, a sturdy pan lid, or another heavy-bottomed pan to press the Blackstone Cuban Sandwich.

Do you put salami on a Cuban sandwich?

Salami is not a core ingredient of a traditional Cuban sandwich. Sometimes you will see salami added depending on where or who is making the sandwich.

Where do Cuban sandwiches come from?

It is generally thought the Cuban sandwich originated in Tampa Bay in Ybor City, Florida as a sandwich for factory workers made with locally available Cuban bread.

What is a medianoche or midnight Cuban sandwich?

The popular cousin of the Cuban sandwich originates in Miami and is served on sweet rolls instead of Cuban bread.

Serve this Blackstone Cuban Sandwich with chips, yuca fries, black beans with rice, or even a 1905 salad. These can also be a meal on their own as well.

These are best served immediately. You can store up to three days in an airtight container in the refrigerator. Serve leftovers cold or reheat briefly in the microwave. I do not recommend freezing these. 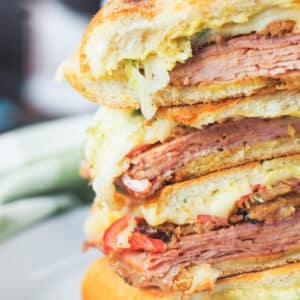 This Blackstone Cuban Sandwich is a simple sandwich made with mojo pork or roast pork, deli ham, Swiss cheese, pickles, and mustard. A hearty sandwich made as we eat them in Tampa Bay that will a huge hit for your family or your next tailgate or party.
5 from 2 votes
Print Pin Rate
Course: Appetizer, Main Course
Cuisine: American
Diet: Diabetic
Prep Time: 10 minutes
Cook Time: 20 minutes
Total Time: 30 minutes
Servings: 4 servings
Calories: 1110kcal
Author: Matt

One loaf of bread will make either two large sandwiches or four small ones.  To serve Cuban-style build the sandwich with mustard, pickles, swiss cheese, mojo pork or roast pork, and deli ham.  To serve American-style build the sandwich with all the above but mix the mustard and mayonnaise together then top with sliced tomato and shredded iceberg lettuce.  If you're Cuban bread didn't come buttered melt some butter and brush on prior to cooking on the griddle. No sandwich press, no problem! Use a cast iron pan, a sturdy pan lid, or another heavy-bottomed pan to press the sandwich.